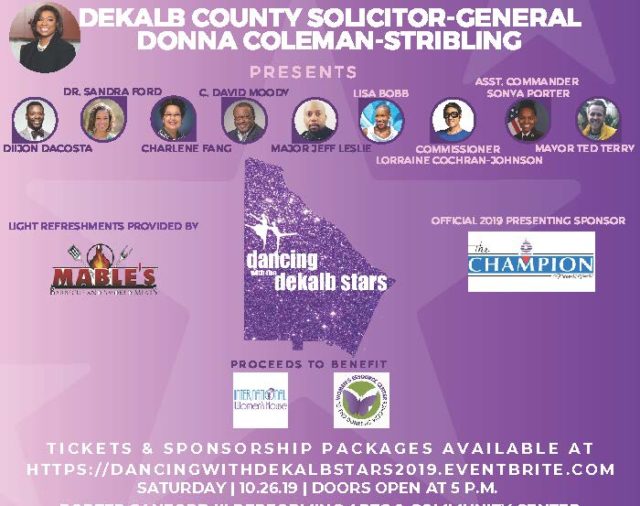 In addition to competing for the championship title, the DeKalb stars will fundraise to support the two non-profits, Women’s Resource Center to End Domestic Violence and International Women’s House. The star to raise the most money will be the Dancing with the DeKalb Stars’ People’s Choice. You can support your favorite DeKalb star by donating through their Click & Pledge page.

Dancing with the DeKalb Stars takes place on Saturday, Oct. 26, at the Porter Sanford III Performing Arts and Community Center. Doors open to the Resource Expo at 5 p.m., with the dance portion beginning at 6 p.m. Local barbeque favorite, Mable’s Barbeque and Smoked Meats, will provide light refreshments during the resource expo and intermission.

Tickets are available online at https://dancingwithdekalbstars2019.eventbrite.com for $25. Those interested in making a larger contribution can become a sponsor or purchase an ad in the event program. Sponsorship packages start at $500. Program ads start at $150.

The expo & fundraiser has raised over $30,000 for Women’s Resource Center to End Domestic Violence and International Women’s House since its inception.

“The DeKalb County community has proven to us their dedication to ending the cycle of abuse by continuously supporting our efforts to assist two organizations entrenched in the fight of ending this vicious cycle,” said Solicitor-General Coleman-Stribling. “Every year our goal is to exceed what we accomplished the year prior and we look forward to seeing DeKalb help us do that again.”

For more information on the Office of the DeKalb County Solicitor-General, please visit our site at www.DeKalbSolicitorGeneral.com