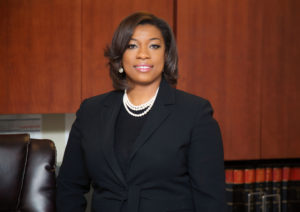 In addition to prosecuting misdemeanors, her office is responsible for all county ordinance violations in our community. After working closely with DeKalb County’s Code Enforcement, she immediately recognized the need to focus on blight and abatement affecting DeKalb County citizens. She addressed these issues by creating the Quality of Life Unit in 2017. The new unit has been tasked to work closely with Code Enforcement and Magistrate Court to remedy residential blight.

Prior to serving as the Solicitor-General, she served the citizens of DeKalb County as the Deputy Chief Assistant District Attorney over the Crimes Against Children Unit, where she managed more than 400 cases annually. She has also practiced in the civil arena. She was a partner at Johnson, Coleman and Stephenson, LLC., and a principal in the Coleman-Stribling Law Group, where she represented clients in a variety of civil and criminal matters. In addition to her extensive trial and management experience, Solicitor-General Coleman-Stribling has substantial training experience. This veteran prosecutor has participated in a variety of seminars ranging from the prosecution of child abuse cases to effective trial techniques where she has presented to lawyers, law enforcement and other professionals. She has also served as an adjunct professor at Emory University School of Law and Southern Polytechnic State University, where she taught litigation techniques and business law courses.

Solicitor-General Coleman-Stribling has a longstanding commitment to DeKalb County and the legal community. She is an active member of the State Bar of Georgia’s Committee to Promote Inclusion in the Profession, the Gate City Bar Association, the Georgia Association of Black Women Attorneys (GABWA), the DeKalb Lawyers Association, the Lamar Inn of Court, Alpha Kappa Alpha Sorority, Incorporated and Columbia Drive United Methodist Church where she serves as Young Adult Ministry Chair.

While in office she began Dancing with the DeKalb Stars, A Domestic Violence Awareness Fundraiser and Resource Expo, which invites notable members of the DeKalb County community to compete for a chance at becoming dancing champion while raising money for local domestic violence non-profit organizations. Her team also started the Stop Teen Dating Violence Public Service Announcement Contest, an annual competition that allows DeKalb County high school juniors and seniors to submit a 1-minute PSA for a chance to win a prom prize package and an opportunity to have their work air on a local television station.

Solicitor-General Coleman-Stribling received her undergraduate degree from Xavier University of Louisiana. She earned her Juris Doctorate from Emory University School of Law and was distinguished as Order of the Advocate. This daughter of DeKalb has deep roots in the county. She is proud to have matriculated through the DeKalb County School System, ultimately graduating from Southwest DeKalb High School. She is committed to building a better, safer DeKalb.